Weekend Away Day to Al Usayla or Graffiti Rock.

Graffiti Rock from the tumuli

Our first Sunday aka Friday here in Arabia,  we have been invited to join a tour to Al Usayla or known in English as Graffiti Rock.  A pre historic sight with many fabulous petroglyphs documenting Saudi Arabia around 5,000 years ago.

We meet outside the cafeteria at 8.00 am,  Our party consists of the enthusiastic organizer, an American visiting economist,  and his wife,  the DH and myself,  a collection of multi-national colleagues,  and two French Children, in total eleven of us.  Our bigger teenagers cannot be asked to move from their beds on a weekend  to see rock carvings.

We set off in a taxi van and an SUV. The site is about 120 kms from the Riyadh,  for most of which there is highway but the last 4 kms are off road,  we don’t know if the driver will be able to get the van all the way there.  The taxi is quite uncomfortable and I have a middle seat,  I am also itchy and hot in the abaya.  Our able organizer gives us a lecture about the site,  and directs the taxi with maps he has downloaded from the internet.  We reach the turn off from the main road,  and track looks okay so the taxi follows the SUV,  after we cross a rocky ridge we can see the rock which sits up on its own out of the rocky desert near to an escarpment.

We find “The Rock” has recently been enclosed with a chain link fence with a heavy padlocked gate , no doubt  to prevent Expats from inspecting, however there is a hole round the back and we climb through.  Thank you to the person before who had remembered wire cutters.  Next time I will include them in my kit bag. 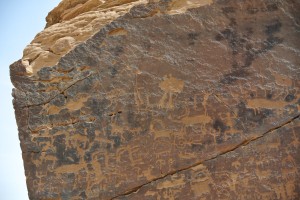 The neolithic etchings were extraordinary. Tiny pictures of leopards, ostrich   families and many other animals etched into black rocks.  The rocks have a black coating, “desert varnish” it is produced over a long period of time by manganese and iron oxide reacting with clay, bacteria and condensed water.  It makes a perfect drawing surface.   Any European or American site like this one would have been surrounded by a hoard of tourists but the neolithic sites of Saudi Arabia are still a hidden treasure.   I dared to climb the rocks, without the penguin suit, you definitely need trainers and to be reasonably fit,  otherwise binoculars would be a good idea. It brings a whole new meaning to “come up and see my etchings”.   The DH suddenly called that cars were coming across the sand.  So the girls had to rush down the rocks and back to the cars to don abayas.

Luckily it was a group of other Ex Patriots who were also on a Friday outing.  Doesn’t that sound weird,  it should be a Sunday Afternoon outing.

After that we climbed the nearby escarpment to see ancient tumuli.  The view was good and the Tumuli,  were as all tumuli, piles of rocks so not very interesting but very very old.  The French boys were disappointed that there were no skeletons or treasure to be seen  and I rather agree with them.

After a hot picnic,  with the taxi van engine running the whole time as the driver wanted the Air Con on,  (Not very salubrious and actually very annoying)  the party started back home.

This time the off-road trip did not go according to plan,  and we got stuck or at least the van got stuck in the sand due to the stupidity of the driver.  The DH took control and tried to make him understand that he had to go fast, only for the driver to say “Yes Yes and then do the opposite,  in fact we got stuck two more times before he actually understood what he was being told. I thought the DH would explode with frustration.

We were tired out by the time we got back to Riyadh,  although some of the rock formations and Red Sand on the Journey back are  spectacular.   I still had to rush out and buy food when we got home.  I barbecued Lamb,  but the Aubergines I cooked with Thyme and Balsamic were not successful.  Still missing the saute pan that I didn’t get from Ikea.

4 Responses to Weekend Away Day to Al Usayla or Graffiti Rock.