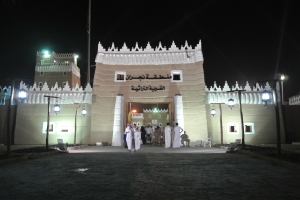 Gates to the palace

A two week long cultural and heritage festival is held each year at Janadriyah,  some 30 miles outside Riyadh.  Originally The festival was founded as a massive camel race meet,  but has gradually become a celebration of the regional heritage of Saudi Arabia.  It now has a vast purpose built site.  Think of the Royal Agriculture Show on steroids .  There is a Camel racecourse and stand, complete with Royal Box.  There are reconstructions of the various types of historical architecture from the Arabian regions,  including Jeddah,  Mecca and Medina which all look very authentic.

In fact there is a whole reconstructed street from Medina,  complete with street vendors selling all kinds of goods and foods.   There are stages for music and dancing and Bedouin tents for relaxing.   Whole areas are cordoned with colourful prayer mats for prayer time.   At the sides of the historical buildings are huge stands representing the Saudi Ministries and corporate Saudi Arabia all with their own hospitality areas.  The same as at any British show.   The  event is enormous and marvelous.

The DS (darling son) and I were invited to attend with a British couple,  the husband has been seconded to the Saudi military for a tour of duty.  They have an eighteen year old daughter who has made friends with my son.  They are both enjoying distracting each other from A’Level revision.    We were part of an expat military convoy invited to attend the camel racing and then to enjoy the festival.

The day we attended was the first “Family Day” and it was packed.  Later I discovered that over 600,0000 people had visited since the opening day the previous week.

Main Concourse of the Janadriyah

For the Mutawwa,  the Saudi Religious police,  the festival is a hot bed of potential improper relationships.  There are many young unmarried Saudi women and men attending who are not usually allowed to mingle,  but with a combination of mobile phones and social media,  in the mele of the Janadriyah anything is possible.   The Mutawwa need to be on their toes,  and in fact my friend her daughter and I all drape headscarves over our heads in order not to draw attention to ourselves.   A year ago,  a friend of hers was hit on the head by a Mutawwa for not covering it.

It seems as though this is not to be.  Every where we go we are followed by photographers.   This, we discover, is a Saudi anachronism.  The country has an office for Tourism and Heritage,  but it is almost impossible to visit Saudi Arabia as a tourist.  So effectively there is no foreign tourism except for expats  who have visas to work.  This means that every effort is made to photograph us in order to prove that Tourism is flourishing.   We receive an effusive welcome in every area of Festival,  with local tourism chiefs (who mostly speak excellent english) exclaiming that we will have our pictures in the newspapers the next day.

They are most interested in taking photos of my son with his friend’s father,  who they have assumed is his son.  (How could a lone women and her son be at this festival without spousal chaperonage.)   We do not disabuse them of this fact it would create too many complications.

At every cultural house we are presented with a goody bag.  I come home with an incense burner,  several fans,  a poster of Mecca and some Saudi candy and many kindly invitations to visit other areas of the country with personalized tours to be arranged if we managed to travel there.   I am overwhelmed by the friendliness and the welcome that we receive.  We feel like true VIP’s.  In every house we are offered dates and Arabian coffee or tea. 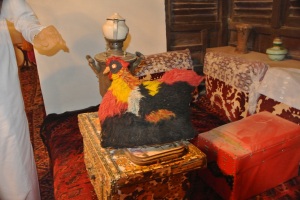 The most wonderful tea cosy in the Jeddah house

I am not sure what we have done to warrant such hospitality and it obvious that not everyone (even other expats) are given the same treatment.  It certainly has made our visit very special.  However I feel slightly like an appendage,  I think some people are struggling to work out what are relationships are,  as it would be very unusual for a Saudi woman to be accompanied by a married man unless he was her husband or close relative.  I do hope that assumptions weren’t made.

We take a break to eat some food during prayers and sit down.   Fule,  a type of bean dip, lovely freshly baked flat breads,  little hot crisp samosas; delicious.   While we are busy eating our picnic we are approached by a girl doing henna tattoos. 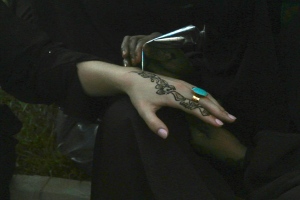 I end up with a design all over my arm.  At the same time I am not really aware of a Saudi girl,  fully covered including Niqab scoping out the DS.  She approaches my friend,  who she believes must be his mother.  She wants his phone number.  She surreptitiously shows her uncovered face on her cell phone.  She is a very pretty girl and her english is good.   We have to be very careful,  as the DS could be deported for engaging in any communication with her.   The DS cannot talk to her.  Over the coming days she continues to text my friend in order to find out how to contact the DS,  but we cannot let them communicate as our visa’s might be rescinded if this were discovered by the Mutawwa.   It just goes to show how complicated it can be being handsome and on display at the Janadriyah,  as I read about the UAE gentlemen who were deported after being considered too handsome.  I realize how fortunate we were that the DS was not caught by the religious police.

2 Responses to The Janadriyah Festival 2013