Preparations for the Eid Al-Adha holiday 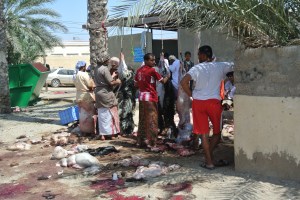 In Saudi Arabia there was an 11 day holiday for Eid Al-Adha this year. Eid Al-Adha celebrates Abraham’s proving that he loved God  more  than anything else by being prepared to sacrifice his only son.  More than 100 million animals are sacrificed by Muslims around the world to honor the holy day.  The celebration is perhaps a mixture of Christmas and Easter (in other words, it’s a big deal):  People put on their best clothes,  say special prayers at the mosque, give gifts to children and families share the sacrificial goat or lamb.  It is also a time of charity where people are encouraged to give generously to the poor.

The dates for Eid Al-Adha change every year as it is calculated by the lunar calendar.  This year it was on the 15th & 16th of October.  Offices and schools are closed from the weekend before to the weekend after,  and everyone is on holiday.

I had long been interested in exploring more of the Arabian Peninsular but it is hard to get information about where to go.  There are few guide books,  or even roads to get to some of the most interesting places in Saudi Arabia.  So the DH and I jumped at the chance when we were invited to join an overland trip to Oman.

In order to take part we would need a vehicle that wouldn’t get stuck in the sand.  Easy you might think,  but actually of all the hundreds of SUV’s available very few are suitable for driving off-road over steep dunes.  We have a monster GMC Yukon,  which looks tough and rugged,  but when it comes to going in the desert, it is a lame duck.   In fact the leader of our trip has a list of banned vehicles, because there have been so many problems with them on previous expeditions.  Unfortunately the Yukon is near the top of that list.  The majority of 4wd vehicles only engage 4wd after the tires start slipping,  and in sand that is already too late.  You also need low ratio gears, the ability to lock differential (and I know what that means), and enough room to carry water, fuel, food and camping gear for 10 days.  When you start looking for all of those features the list becomes very meagre.  After consulting local experts, our list came down to: Nissan Patrol,  Landrover Discovery, Range Rover, Toyoto Landcruiser, Toyoto Prado, Nissan Pathfinder,  or a Toyoto Pick-up (which the DH fancied so we could carry our camels in the back) 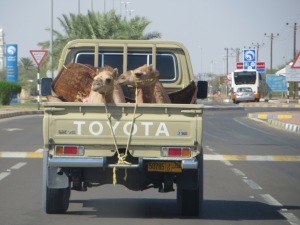 Our local expert told us to leave out the Landrover and Range Rover as they would mark us out as rich B**stds ideal for kidnapping or carjacking, (yes seriously).  As I researched the second hand car market in Riyadh,  it became increasingly obvious that these cars were like gold dust, even the pick-up is apparently back ordered.  If we couldn’t get the right car,  we wouldn’t be able to go on the trip.  Then one of the DH’s colleagues offered to help as he knew a yemeni car dealer who acts on behalf of a prince, selling off second hand vehicles with low mileages that the prince wishes to trade in.   We rushed to buy a second hand Nissan Patrol only to find that it had been sold an hour earlier to someone who turned up with the cash in hand,  while we were still trying to get the money out of the bank.

So having said he didn’t want to buy a new car the DH took matters into his own hands and acquired his new ‘baby’,  a Toyoto FJ cruiser,  beloved of texan hairdressers, but here considered a boy-racer car… Is that the male menopause I hear you ask?  He is secretly or perhaps not so secretly delighted with it as all the young staff in his office have asked him to take them dune riding.   As far as I was concerned at least we had a ride,  I only have two other words on the subject; boys’ toys. 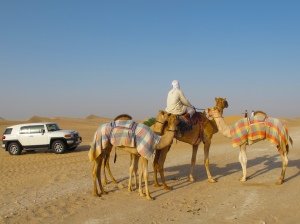 Now we needed the rest of the kit for the trip. (I have put a list on a separate page for anyone planning their own trip.) The most testing of the purchases was acquiring a second spare wheel.  How could it be so difficult? Let me begin by saying I had to buy the wheel separately from the tire,  The wheel came from the main Toyoto dealership, which is akin to  Sainsburys on a Saturday morning at all times.  I had to queue to ask a question,  and men kept on barging in front of me,  then I had go home and establish which wheel I needed from a picture print-out of 3 different possible wheels and then return to the dealership, order the wheel and collect it the following day.  So only 3 trips.  Buying  the tire to go on the wheel was even more exhausting,  having eventually established what tire we wanted, buying it was a bartering process down the Khourais road.  After a while I couldn’t face it any longer so I asked my driver to get the best deal he could and come back with a tire.  I am sure that we were ripped off.  It all seemed terribly expensive and took me the best part of 3 days to sort out, 6 different trips in total!  Nothing is straightforward here.

The list of everything we needed for 10 days in the desert was huge and  read like Ratty’s picnic hamper,  although no pickled gherkins, but 40 liters of water and a lamb curry for emergencies.  Our camping equipment as it exists is spread across the globe,  some in the UK and some in the States and some has spread its wings and flown goodness knows where,  so for this trip we bought some new specific things,  like a monster air compressor for re-inflating tires after sand driving,  and an enormous (magic?) carpet that the DH couldn’t leave in the shop.  And then friends lent us other stuff. 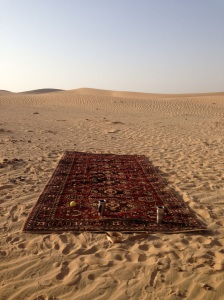 By the time we were to leave nearly our entire utility room was stacked with gear.  I wondered how we would fit it in the car without a roof rack. But never fear the Meister Packer was near,  after a few re-packs he managed to squeeze everything in and strap it down with bright red webbing ratchet straps.

At 5.30am on 11th of October, full to the gunnels we set out on our first Arabian camping adventure…………

This entry was posted in Here and Now. Bookmark the permalink.

4 Responses to Preparations for the Eid Al-Adha holiday