What will they call Riyadh’s new metro? 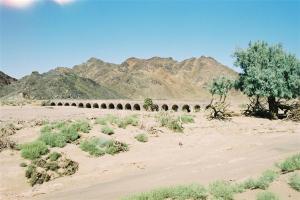 Abu na’am bridge. The focus of Lawrence’s 1917 attack on the Hejaz railway.

When Lawrence of Arabia lay in the hills above Abu Na’am Station on the Hejaz Railway a little less than a century ago.  His mind was on the destruction of the Ottoman empire’s main supply line through Arabia: The Hejaz Railway.  A railway born of blood and sweat, was built in the most inhospitable conditions to forge a link between Damascus,  Madinah (and eventually Mecca, although that section was never built).

The last Ottoman Sultan’s dearest wish was to open up the pilgrimage to Mecca and Madinah to Muslims around the world and not just those who were wealthy enough to be able to afford the grueling desert journey by camel.   The railway was to be paid for by subscription of Muslims from around the world,  a major feat at the beginning of the 2oth Century, although donations were generous unfortunately they did not begin to cover the cost.  A decree was issued that all government employees would “donate” 1 month’s salary.  All rural villages were forced to give large donations,  under the threat of violence.

I doubt that any of those concerned with the gargantuan Hejaz Railway construction would believe the modern plans to build an Arabian wide rail transport system,  with links  East, West, North and South. It is planned to connect every major city in Saudi Arabia over the next 30 years – a massive infrastructure plan funded by the government and essential for economic development of the country.  The Kingdom, by taking advantage of the global recession,   was able to contract with the best railway engineering companies in the world, to build the system on an ambitious timescale.

In the next 10 years there are plans to build Metro rail systems in Riyadh, Jeddah, Mecca, Madinah and Dammam. As we live in Riyadh,  I am most interested in the Riyadh Metro and LRT.  I  recently went to talk given at the Corona Club of Riyadh, by Emad Alrajih, President and CEO of the Arabian Railway Company, ARC.  ARC have been appointed one of 3 consortia to build the Riyadh Metro. Whilst everyone has heard many rumors about the project,  this was an opportunity to hear about it from the  “Horse’s Mouth” so to speak.

The metro will consist of 6 separate lines, with 85 stations, and 4 major hubs, 176 KM of track and  21 park n’ ride facilities. There will also be a high tech integrated bus system.  It will be built by the 3 consortia,  with 30,000 staff.

Now wait for it,  the completion date is 2018,  not “Inshallah 2018” but a real deadline.  When I questioned Mr Alrajih about this,  he was clear to point out that when over 27 Billion US dollars had been invested in the project,  “Inshallah” was not an option.  The integrated bus project is due for completion even earlier in 2016. The project is going to affect every single person who lives here,  and according to Mr Alrajih there will be pain,  real pain and it  will  impact everyone at the start of 2015.

35% of the system will be underground, 5% will be ground level and 60% will be overground.  That is a lot of  heavy construction in 4 years.  There will also be 2 independent power stations built to generate electricity for the railway.  Whatever the cost, both financially and environmentally,  Riyadh needs this,  if the city is going to develop as an economic  power house.  As all those who live there know,  the traffic in Riyadh is  a nightmare.  This project will layer on frustration.  There will be road closures.  There will be terrible gridlock.  Because there are 3 consortia all reporting to a higher power,  there will be inter ministry,  inter agency and inter consortia problems, not to mention the difficult integration of 2 other major high speed rail lines, Riyadh to Jeddah and Riyadh to Dammam, and the King Abdullah financial center mono-rail which are being constructed simultaneously.

There are plans in place to try to ease the problem by controlling the amount of traffic on the city roads,  including, (but not yet confirmed.)

I am trying not to be cynical but this does not bode well for women being given the right to drive anytime soon, I also feel that the movement of women around the city is likely to suffer most.  I would expect that Iqamas for foreign drivers will be further restricted and there will be another ‘valid’ excuse not to issue women with driving licences. How will park n’ ride work if women are not allowed to travel with men not related to them? Also if car ownership is going to be limited,  it doesn’t take much imagination to realize whose cars will likely be restricted, does it?

So, rant over! What does the Metro eventually mean for Riyadh.  Despite the immediate pain and restrictions, it has to be a positive step forward.  Although the operations and maintenance contracts have yet to be issued, the cost of tickets is to be subsidized and prices kept low to encourage people off the roads.  There will be 3 types of carriages,  1st class,  family (women and families) and single (men).  (I have not been able to find out if women will be allowed to buy first class tickets or not.)  It will certainly allow women to travel and work freely throughout the city without having to pay a good proportion of their salaries for taxis and drivers,  although there is some doubt about whether women will be able to travel with men on the integrated bus system and how that will work.

There has not been a great deal of publicity for the Metro and how it will work,  I think that the ‘powers that be’ are waiting until the painful part is drawing to a close to publicize it more.   As construction begins close to our compound,  I am beginning to wonder what it will be called.  I had two ideas,  The RAT,  (Riyadh Automated Transport) and or the KAAT,  (King Abdullah Automated Transport) but the idea of riding the Riyadh Rat appeals to me and hopefully will be listed amongst the worlds greatest metropolitan transport systems.

3 Responses to What will they call Riyadh’s new metro?